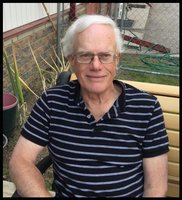 Gary Allan Thompson was born on April 18, 1947 in Arcola, Saskatchewan to Wilbert and Yvonne Thompson. Gary worked for the Royal Bank for 30 years. After he retired from the bank, he became the Rural Economic Development Office for the Town of Macklin. Gary was passionate about fishing and the outdoors, which led to his involvement with the Macklin Wildlife Federation in 1993. Gary was the very proud recipient of the Life Time Achievement Award in January of 2017. Gary passed away on January 2, 2020 at the St. Joseph’s Health Centre in Macklin, Saskatchewan at the age of 72 years. He was our Husband, Father, Grandfather and Friend and will be truly missed by many. Gary will be forever missed and lovingly remembered by his wife of 50 years, Cindy; daughter, Terri (Dean); son, Brad (Jennifer) and their children, Porter and River; son, Ryan and his children, Justin, Alexandra and Ava; daughter, Danielle; sister, Judy Thompson; as well as numerous other relatives and friends. He was predeceased by his parents, Wilbert and Yvonne; and brother, Robert.