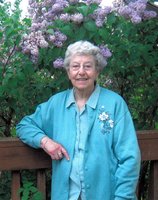 It is with relief but sadness that we announce that our mom Eunice “Nee” Frances Partington (nee Theed) passed away on January 31, 2021. She was just shy of her 97th birthday. Nee was born in Rockville Centre, New York to Arthur and Vera Theed, originally from England. Her father was transferred back to England when she was 8 years old, so she spent most of her young life in East Horsley, England. World War 2 made a big difference in many lives, as it did hers. Her mother urged she and her sister leave England for the safety of America, but they refused and as fate would have it, the ship they were to sail on was torpedoed and all lives were lost! It was in East Horsley, England that she met the love of her life Reg, a Canadian soldier billeted there during the war. They were married in 1945 and set sail to Canada the following year. It took some time to adjust from the civilized British traditions to the easy-going Canadian lifestyle. One afternoon a neighbour and his family stopped by Nee and Reg’s home on the prairie and stayed well into the supper hour. Reg took Nee aside and whispered that she might prepare some supper for company and she was astonished that no formal invitation was necessary here! Nee was a great seamstress and quilter. Knitting was another livelong passion. Everyone in the family has a knitted blanket or some dishcloths made by Grandma, she was always happy to teach those skills and in her nineties, she even taught her nurse how to knit! She and Reg were always busy. When they were not farming, they were gardening, feeding birds or refinishing their latest furniture find. Mom had many collections and would likely say that she left a hell of a lot of stuff for her daughters, who have no idea what to do with it! Her remarkable memory gave way to a genuine interest in people, she was never judgemental. She had impeccable British manners, but a sharp and witty sense of humour right to the end. She is survived by daughter, Shirley (Jim) Palmer; daughter in-law, Deb Partington; daughters, Denise Partington, and Judy (Cam) Bayda; Grandchildren, Trevor, Travis (Heather), Tyler, Todd (Jamie), Jody, Brett (Kristen), Krista (Aaron) Zunti, Curtis (Dana) Sperle, Cory (Nurgul) Sperle, Cam (Jenn) Sperle, Roxy Cohen (Mike Brink); Great Grandchildren, Evan, Devynn, Lake, Sean, Dez, Zane, Blake, Brooklyn, Keely, Kayne, Emilee, Lucas, Payton, Casey, Ty, Samantha, Alyssa, Jada, Ty, Chantal, Taylor, Asher, Zara, Olivia and Madden. Nee was predeceased by her husband, Reg; and sons, Donald and Glen. Cards may be directed to: Denise Partington Box 802 Macklin, Sask S0L 2C0