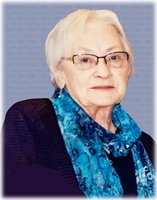 Donabelle Lucille Laye was born October 5, 1936 to Donald and Irene Brown of Czar, Alberta. She grew up in Czar where she attended school and helped her parents with running their store and caring for her four younger siblings. After graduation, Donnabelle went to live in Edmonton, Alberta where she studied Home Economics. She married Alex Laye on June 9,1958 and moved to Sounding Lake where they ran a successful ranch and raised their family. Their daughter Janet was born in 1959, followed by sons Dean in 1960, and Mark in 1961. Donnabelle was a wonderful singer, great curler, avid seamstress, animated sports fan, and an outstanding cook; famous for her delicious homemade soups. She was known for her quick wit, and for her gusto in standing up for things she believed in. She had strong opinions that she could always back up, being well read and versed in many subjects. The arrival of grandchildren in Donnabelle’s life brought her great joy. She loved them dearly and taught them a great deal with her extensive knowledge on everything from prairie gardening, to birds, sewing, and baking bread. Her close relationship with her grandchildren continued into their adulthood, and she thoroughly enjoyed becoming a Great Grandma; she was greatly loved and admired by her great grandchildren. She was active throughout her later years, still gardening and working in her yard right up until her recent illness and hospitalization in the fall. Donnabelle passed away peacefully with her family by her side at the Provost Health Centre in Provost, Alberta at the age of 84 years. She will be fondly remembered and greatly missed. She will be lovingly remembered by her husband of 62 years, Alex Laye of Sounding Lake; daughter, Janet Van Gils (Ed) of Slocan, BC; grandsons, Lucas, Ben, and John Van Gils of Rossland, BC; son, Mark Laye (Cate) of Sounding Lake; granddaughter, Meghan Sparks (Brett) of Innisfail; great grandchildren, Boone and Drey Sparks; grandson, Brendan Laye of Sounding Lake; granddaughter, Tessa Laye (Riley) of Markerville; great granddaughter, Blue Wik; siblings, Patrick Brown (Beth) of Brooks, Miriam Grocock (Bob) of Czar, Conn Brown (Margret) of Sherwood Park, and Louise Wall (David) of Calgary; as well as numerous other relatives, neighbours, and friends. She was predeceased by her son, Dean; her parents, Donald and Irene Brown.