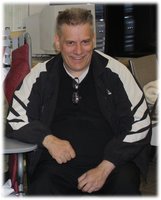 Richard “Rick” Joseph Degenstien was born October 4, 1952 in Macklin, Saskatchewan to Joe and Pauline Degenstien (nee Wagar), he was the oldest of seven children. Rick completed his schooling from grades 1 through 12 in Macklin, Saskatchewan. Growing up he enjoyed hockey and school sports and he did well in all of them. As a teenager he was active in air cadets, he really enjoyed it and was awarded the Finley trophy, which was the highest award for the 601 squadron. Richard previously worked as a personal care recreation worker until his health made him stop. Mental health hindered his life a bit, but he was always positive and considered each new day a blessing. He moved to long term care in Kindersley, Saskatchewan in April 2020, due to his declining health. He enjoyed watching TV, being outside, walking, talking to family and friends on the phone and playing his guitar. As well as the odd lively discussion on politics! Sadly, Richard passed away suddenly on February 20, 2021 at the Kindersley Hospital at the age of 68 years due to heart complications. Richard will be forever missed by his son, Shawn; grandchildren; step-daughters, Laurie, Tina, Judy and their children; his father, Joe; sisters, Barb and Patricia (Herb); brothers, Tom (Joan), Robert (Cathy), John (Denalda) and Mervin (Andrea); many nieces and nephews, great-nieces and nephews, as well as numerous other relatives and friends. Richard was predeceased by his mother, Pauline in 2012. In lieu of flowers, memorial donations can be made to the Canadian Mental Health Association.