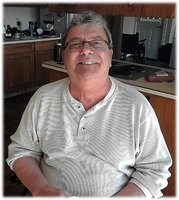 Kelvin was born in Delisle, Saskatchewan on October 30, 1958 to Walter & Helen Hnatuk. He was the fifth eldest of eleven children. The lure of Alberta Oil brought Kelvin to Provost in 1979 and it was here that he met Cathryn Menzies, his wife and partner of 42 years. They were married in Calgary on February 12, 1983. He worked extensively in the oil fields across Western Canada which also took him internationally to Ecuador and offshore in the East Timor Sea. After receiving a leg amputation in 2018, he saw the need for a disabled support group in Provost. He spearheaded the Rising Strong Disability Support Group which is ongoing and coordinated by Primary Care Network and Provost & District FCSS. Sadly, Kelvin passed away unexpectedly on April 28, 2021 at the age of 62 years. He leaves to mourn his wife, Cathryn; brothers, Greg (Laurie), Raymond (Chris) and Randy (Brenda); sisters, Charlene Smith (Robin), Pam Beznoska (Neal), Doreen Moreau (Terry) and Barbara Jalbert (Brent); sister-in-law, Paula Hnatuk (†John); brothers-in-law, Bruce Menzies and David Menzies (Yvonne McNamara); sisters-in-law, Elizabeth Menzies (Ken Gaida) and Sandra Sorensen (†Paul Sorensen); as well as numerous nieces, nephews, great nieces and nephews. Kelvin was predeceased by his parents, Walter & Helen Hnatuk; infant brother, Timothy; brothers, Leonard and John; father and mother-in-law, Robert & Marjorie Menzies; and brother in laws, Bob Menzies and Paul Sorensen. He will be forever missed and lovingly remembered by his many friends and extended relatives throughout the world. Hardly a day would go by without him commenting on how fortunate we were to have such beautiful sunsets. Rest in Peace Kelvin – we will keep an eye on those sunsets for you and think of you with each one that comes our way. A graveside service will take place at the Provost Cemetery at a later date.