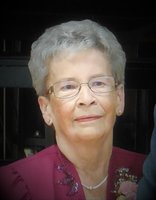 Donna Gay Penman (Lawrason) was born in Provost, AB on January 12th, 1944 to Francis “Frank” and Ethel Lawrason joining older brother, Ralph (he was born on the same day three years earlier) and Frances “Franny”. It was Ralph that felt given the hair she came into the world with, she should be named Topsy, but thankfully Frank and Ethel’s name choice won out. She attended school in Czar and Hughenden and kept active with the 4H Club, played softball and basketball and even ended up coaching basketball. She loved to dance and that was a special way that she would bond with her dad. Later in life, Donna was an avid curler and golfer for many years and then more recently transitioned to playing floor shuffleboard and bocce at the South East Edmonton Seniors Association (SEESA). Donna married Roger Penman, a local fellow, albeit slightly older, on May 21st, 1966 and they moved to Edmonton to begin their life together. Colin was born on June 21st, 1969 and Colleen joined the family on November 20th, 1970. Over the years, their family continued to grow with the addition of Colin’s spouse, Cara, as well as 4 grandchildren – Mitchell, Derek, Stuart and Addison. Career wise, Donna spent 10 years working for the Bank of Montreal and then changed fields and moved into the oil patch where she worked in Accounts Payable at Stream-Flo Industries for over 30 years. While known as “Mom” to many of her fellow employees, some have confessed to being a little scared of her – she could put the run on them with just a glance if they were slow turning in their paperwork! She was very involved in their company social club and coordinated events such as picnics, golf tournaments and her favourite, the annual Christmas Party for nearly 500 employees and partners. Donna was a very social person and LOVED to “visit” teaching us kids that it is actually a verb! Every summer they took the trailer down to Shorncliffe Lake, parked it for weeks at a time and really enjoyed making the rounds in the community. They also enjoyed hosting friends and family in the trailer or around the campfire to catch up and maybe gossip a little. Donna was a romantic through and through and loved to read romance novels as is evidenced in what we suspect is over 200 of them we find all over the house! She also very much loved being a Grandma and enjoyed spending time with her grandkids whenever she could. Thanks to a bit of scare in her teens, Donna did not like swimming much and would not do much more than dip her toes into the lake or a pool. One of Colleen’s favourite memories is one day at the lake when Donna, Diane Almberg and Shirley Anne Berndt all decided to get in the water and played just like kids, splashing around, chasing each other and fighting for space on an air mattress. Colin remembers teasing his Mom about something and she threatened to tickle him to get him to stop. This just egged him on more of course and she flew out of the trailer and had him on the ground making him giggle in the blink of an eye! He sure learned not to mess with his Mother! Donna may have been tiny, but she was full of fire and a love of life. We will miss her company, her smile, her crumb cake and best ever potato salad. We all look forward to the time when we will see her again. Donna passed away at the age of 77 years at the University of Alberta Hospital on Friday, May 21st, 2021 as a result of complications following surgery. She is lovingly remembered by her husband, Roger; her children, Colin (Cara) and Colleen; grandchildren, Mitchell, Derek, Stuart and Addison; her sister, Frances (Vernon) McNalley; brother, Ralph (Myrna) Lawrason; sister-in-law, Kay Serwachak (Penman); as well as her extended family and many friends in Edmonton as well as in the Czar area. Donna was predeceased by parents, Frank and Ethel (Warburton); brothers-in-law, David Penman, Chuck Serwachak; sisters-in-law, Shirley Anne Berndt (McKee) and Shirley Penman (Anderson).