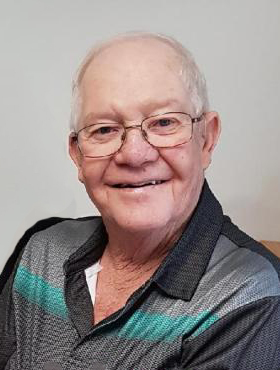 Ernest Clair Symington was born on February 26, 1941, second born and first son to Clair and Lillian Symington. Ernie was born in Provost, and grew up in the Silver Lake District north of Provost. He was one of five children, an older sister Viola and younger siblings Dennis, David and LeAnn. Around 1977, Ernie started enjoying Maxine Dallyn’s company as they had numerous similar interests. Maxine and her two daughters, Joeena and Donna, became a big part of Ernie’s life. After living in Provost for several years, Ernie and Maxine bought their acreage from Keith Reid north of Provost where they built a beautiful new home and place where they could enjoy their horses. Ernie and Maxine enjoyed many happy years and good times together right up until Maxine passed away in 2006. In later years, Ernie’s health deteriorated battling diabetes, a quadruple heart bypass, and prostate cancer. Living on his own was getting more difficult and with some encouragement Ernie moved to the Hillcrest Lodge in Provost. Not surprisingly, his health improved with good meals, good care, and lots of visiting and card games. Ernie lived very happily at the Lodge until his health took a turn for the worse earlier this summer and was moved to the Nursing Home where he was very well cared for right up until his last breath. Sadly, Ernie passed away on August 15, 2021 at the Provost Health Centre – Long Term Care at the age of 80 years. Ernie leaves many special memories behind with his family and many friends; brothers, Dennis (Darnell) Symington and David (Bernice) Symington; sister, LeAnn (Joe) Kloster; Joeena Dallyn (Brent Hunt), Cody Opper, Donna (Bob) Brulhart, Tyler (Christie) Brulhart, Melissa Brulhart (Cody Wood) and their children, Heston and Halle; as well as many nieces, nephews and other relatives.