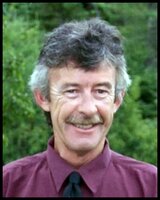 Alexander “Alex” “Sandy” Lynch was born on September 21, 1960 to Margaret and Alexander Lynch of Bellevue, Newfoundland. He was the second of nine children. Sandy loved hockey, fishing, hunting, and spending time with his family and friends. Following in his father footsteps, he studied to become a mason and later worked in the oil fields of Saskatchewan. Surrounded by his loved ones, Alexander peacefully passed away at the Provost Health Centre on October 24, 2021 at the age of 61 years. Sandy will be lovingly remembered by his partner, Danette; children, Ryan (Kristina), Ashley (Paul), Devon (Courtney); eight siblings, Frances (Philip), Elizabeth (Fred), Martin, Margaret (Mike), Karen, Tom (Carole), Christina (Ken), Anne-Marie (Neil); grandchildren, Grayson and Lincoln; nieces and nephews, as well as his large extended family. He is predeceased by his parents, Alexander and Margaret. A Funeral Services for Sandy will be held in Newfoundland at a later date. The family would like to send a special thank you to Dr. Malan and the nursing staff at Provost Health Center for their excellent care and kindness.