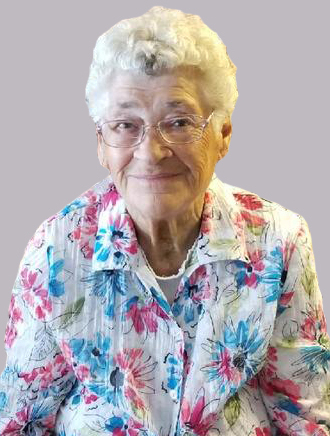 Doreen Marie Sieben (Koehmstedt) was born on February 21, 1932 on the homestead to †Finley and †Ida Koehmstedt. She was the youngest of six children. Doreen attended Glen Eden School until grade 8 before moving to Rosetown to work. While attending her sister’s wedding, Doreen met the love of her life, †Bert Sieben, who happened to be the groom’s brother. On October 10, 1955, Doreen & Bert married and began their life on the Sieben Family Farm. There, they farmed the land, raised cattle, pigs, horses, chickens, geese, ducks, & turkeys. However, this didn’t keep them busy enough and they decided to start a family of their own. Together they raised their four sons and seven daughters. When Doreen wasn’t busy chasing her children, she was often found tending to her huge garden, sewing, and baking. Doreen and Bert enjoyed visiting their family and neighbors to play cards. After the loss of her husband, Doreen helped out on the farm a few years before moving to Provost in 2006. There, she joined the senior citizens club while still keeping up with a garden, the farmers market, more bingo, more cards and spending time with her many friends and family. In addition to her commitment to her family, Doreen was equally committed to her faith. She was a member of St. Mary’s Roman Catholic Parish, the CWL, and the Red Cross. Doreen passed away surrounded by her family on October 26, 2021 at the Provost Health Centre - Long Term Care at the age of 89 years. She will be lovingly remembered and dearly missed by her children, Boniface; Donna and Ron Mattus, Amy, Sheldon, Trevor, Randi; Gerard and Michelle Sieben, Carissa, Eva Mae, Tanner, Teah; Annette and Tim Gallinger, Jeffrey, Corey, Kyley, Lacey; Edward and Faye Sieben, Mathew, Shae-Lynn, Dakota; Sylvia and Wade Manning, Cassie, Wacey, Veronica; Sharon Pillon and Les Spence, Jessi, Rebecca Kaylee; Shelia, Ryley; Lori and Darcy Wildeman, Caitlyn, Taneta, Blake, Zachary, Trinity, Mercedeze; Daryl and Bonnie Sieben, William, Ellie, Alexander; Debra and Brian Bolz, Derek, Cara, Alysa; twenty-three great-grandchildren; as well as her twin sister, Loreen Deck; and many extended family, other relatives, and close friends. Doreen was predeceased by her husband, Bert; grandsons, Christopher Gallinger and Samuel Sieben; her siblings, Bernadette, Armella, Mildred, and Norman. If you would like to plant a tree in a local cemetery, please contact GFH directly at 780-753-2332.