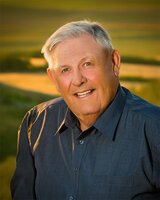 Robert William Worobo was born on September 2, 1939 in Provost, Alberta to William and Jean Worobo. He was the oldest in a family of four. On June 9, 1962 he married Marilyn Balfour. Together, Robert and Marilyn had three children, Cheryl Yvonne, born on April 30, 1963, Darcy Robert, born on August 6, 1966, and Tanya Lee, born on January 16, 1978, completing their family. On November 12, 2021, with his family by his side, Robert passed away at the Wainwright Health Centre at the age of 82 years. He will be forever missed and lovingly remembered by his wife of 59 years, Marilyn; daughter, Cheryl (Allan) Boser; son, Darcy (Sherry) Worobo; and daughter, Tanya (Rod) Schenk; grandchildren, Kaitlyn Boser (Kale); Breanne Worobo (Colin), Kendra Worobo, Delaney Worobo; Meaghan Schenk, Kassidy Schenk (Craig), Colton Schenk, Morgan Schenk, and Kash Schenk. He is also survived by his sister, Yvonne (Jim) Isaman; brother, Dale Worobo; special nephew, Sheldon Isaman; special niece, Janelle Jones; as well as other numerous relatives and friends. Robert was predeceased by parents, William and Jean; and brother, Raymond Worobo. A funeral service for Robert will be held on Wednesday, November 17, 2021 at the Provost Recreation & Cultural Centre at 2:00 p.m. with a time of fellowship and refreshments to follow. A private family interment will take place at the Provost Cemetery. Robert’s Funeral Service will be open to the public and will be following the Restriction Exception Program, which requires all to provide Proof of Vaccination (2 weeks post second shot) or a negative COVID Test within 72 hours to attend.