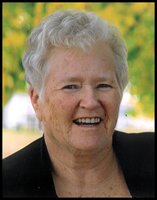 Lynanne K Thunberg (nee Swanson) passed away November 24, 2021 at the Provost Health Centre as a result of an unexpected health issue, at the age of 77 years. Lynanne was born in the Provost Hospital on May 4, 1944 and grew up on a farm north of Metiskow. As a farm kid, she had numerous rural adventures which prepared her for many of the responsibilities she undertook as an adult. In January of 1962, Lynanne enrolled in Nursing Aide School at University of Alberta in Edmonton. After graduating, she worked in Edmonton, Wainwright and Provost Hospital. At a cousin’s wedding dance, she met Lloyd Thunberg and they married a year and a half later. The next few years were a flurry of farming and raising a family. The couple were blessed with four children over five years: Kevin, Karen, Murray and Glenn. As the children grew, Lynanne turned back to a rewarding career in nursing, where she was able to do what she does best - care for people. When Lynanne wasn’t working as a nurse, she gardened, canned, drove her children around to numerous activities, knitted, crocheted, scrapbooked and baked up a storm. Her decadent chiffon cakes were enjoyed by many throughout the years! As her children grew older, she and Lloyd were blessed with seven grandchildren whom she loved dearly. Nothing brought her more joy than spending time with her grandchildren and following their many activities. Lynanne called the Provost Hillcrest Lodge home for the past few years where she was a regular at bridge, canasta, crib and other card games. She thoroughly enjoyed visits with her neighbors, outings with her family and always had a crossword or sudoku puzzle in progress. Lynanne will be forever missed and lovingly remembered by her children, Kevin, Karen (Dean), Murray (John) and Glenn (Holly); her grandchildren, Colten, Keenan, Kristen Brule, Ryan (Stephanie) Thunberg, Kale, Boyd and Shea Thunberg; her sister, Priscilla (Alex) Vass; brothers, Greg, Wayne (Linda) and Phil (Holly) Swanson; and many wonderful nieces and nephews. She was predeceased by her husband, Lloyd; brother, Ron; and sister-in-law, Becky Swanson; sister, Laurie Swanson; brother-in-law, Leo Carter; and sister-in-law, Rose Thunberg. Lynanne was affectionately known as Grammy and G-Ma by her grandchildren. She was a beautiful and kind soul who loved birds, butterflies and taking pictures, all of which brought so much joy and enrichment to her life. A Private Family Funeral Service will be held on Tuesday, November 30, 2021 at 1:00 p.m. The service will be livestreamed for the rest of the community who is unable to attend. It will be accessible through the GFH website. If you would like to plant a tree in a local cemetery, please contact GFH directly 780-753-2332.