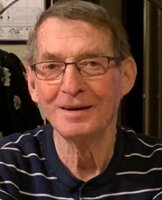 It is with great sadness, that we announce the passing of Ron Harold Adams. At the age of 77, May 13th, 2022, in the Wainwright Hospital, Ron passed with his dear wife of 32 years, Sharon by his side. Ron was born February 11, 1945 in Salon Arm, BC. The son of Wesley and Ilene Adams, a brother to Harvey (Julie- Anne), Charlie (Judy), Linda Bogath, Judy Cranston, and Betty -Lou (Gerry) Tober. Ron was a master meat cutter by trade, where he enjoyed travelling to different places such as Pigeon Lake, Enderby, Lloydminster and Waterton, to work. In later years, he met the love of his life, Sharon Humphrey. They were married in March of 1990. He than gained his family, Wendy (Jeff) Hovde, Linda (Hilson) Maull, Sandy (Lorne) Loewen, and Lee (Debbie) Humphrey. In 1995, they relocated back home to Hughenden, AB, where they were closer to watch their grandchildren grow up. Chelse (Tyler) Pearson, Chantel (Stefan) Meyer, Chase (Taylor- Rae) Hovde, Mandy (Aaron) Christensen, Megan (Marc) Holte, Levi (Taylor) Maull, Walker Maull, Tyson (Raynelle) Boomhower, Lucas Loewen, Shylyn (Reagan) Loewen. Ron enjoyed the change of pace as he was employed in maintenance for the Hughenden Golf Course and than for the Village of Amisk. He was also a long-standing member of the Lions Club for many years. He joined in BC and carried on through the years. He had a remarkable perfect attendance with the Hughenden Lions since he joined 12 years ago. Once grandchildren started coming, Ron and Sharon made sure not to miss out on any events. There were a lot of birthdays, school events, ball games, hockey games, and 4H events to keep Ron busy. Piper, Harper, Rumer, Goldie, Navy, Bau, River, Eden, Wren, Quinn, Dallas, Wynter, Madison, Elijah, Vienna, Aspen and Ryker all enjoyed seeing great grandpa and filling him in with all their up-and-coming activities and adventures. Ron is survived by his wife, Sharon,children, grandchildren, great grandchildren, sisters, sister in laws, brother-in-law, and many nieces and nephews. He was predeceased by his father, Wes Adams; mother and stepfather, Ilene and Clarence Rix; parents-in-laws, Victor and Mable Jordahl; brothers, Harvey and Charlie Adams; brother-in-law, Bob Cranston; and great grandson, Weston Christensen. As per Ron’s wishes, the family will be having a smaller service at a later date.