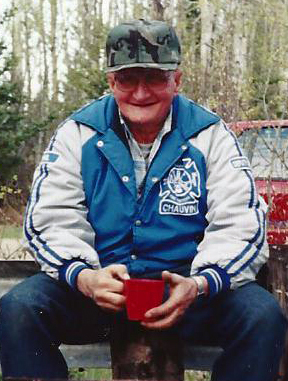 Philip Robert Sevigny was born on November 14, 1933 to Arthur and Jeanne Sevigny near Chauvin, Alberta.

Philip grew up on a farm eight miles from the village of Chauvin with his two brothers and attended the Killarney School until grade 10.

He bought his trucking business in 1955. Phil lived a full and active life and was very well known in the community with his helpful hands and wealth of knowledge.

Phil used his trucking expertise and transported cattle and grain; then later bought a backhoe to help farmer’s clean pens and work in the oilfield. Closer to his retirement, he helped a couple of local farmers whenever they needed a hand.

His passions include camping and fishing. He loved to help organize sporting events such as, the Farmers Chauvin Baseball Tournaments, Gymkhanas and Chariot Races. He was actively involved in the Chauvin Fire Department for 31 years, where he received the award of the Alberta Fire Services Exemplary Service Medal in September 1990. In July 2017, Phil received the Senator’s Contribution Award in recognition of outstanding dedication to the Village of Chauvin Community through volunteerism and civic engagement. Phil was a member of the Elks of Canada and received his 50 year pin; it was an outstanding accomplishment and long-time dedication on his part.

Phil played multiple instruments. He would drive all over Alberta and Saskatchewan in his motorhome to attend Fiddle Contests (Festivals).

Philip was predeceased by his parents, Arthur and Jeanne; sister, Juliette; sister in law, Mildred Willis and niece in law, Phyllis Sevigny.

Share Your Memory of
Joseph
Upload Your Memory View All Memories
Be the first to upload a memory!
Share A Memory
Plant a Tree