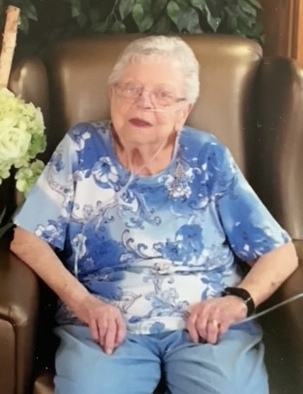 Please share a memory of Alma to include in a keepsake book for family and friends.
View Tribute Book

Alma Eleanor Phillippe passed away peacefully in Camrose on September 14, 2022 at the age of 92.

Alma was born at the Lloydminster Hospital on October 7, 1929 to Thelma and Samuel Benner. She was the seventh of eight children and was raised on a farm at Paradise Valley. She attended a country school until grade 8 then moved into Paradise Valley to continue her education until Grade 10 while she worked at a restaurant for room and board. At that time she met the love of her life, Vernon Charles Phillippe.

They were married on November 3, 1947. Together they had six children. They farmed at Paradise Valley until 1960 when they moved to Provost and Alma spent the next years raising their family and caring for their home. As the family grew up and started to leave home Alma had more time on her hands and decided to get her drivers licence and go to work for Wayne’s Plumbing where she worked for 11 years. During this time, she also became an avid golfer and bridge player.

After Vern’s sudden passing in November of 1994 she continued with these hobbies along with her love of reading, puzzles and crosswords. She watched the news daily and kept up to date on the current events.

She was predeceased by her husband, Vern, her parents and her oldest grandson, Darin.

Alma will be forever missed and lovingly remembered by her children: Sharon (Wayne) McDonald, Roger (Cellie) Phillippe, Arlene Laye, Linda (Darryl) Laye, Larry (Shelley) Phillippe and Judy (Wayne) Walz; all her grandchildren and great grandchildren; her sister, Joyce Towndrow; her good friend Janet Paulgaard; as well as her many nieces and nephews.

A private family graveside will be held at the Provost Cemetery with Pastor Paul McCormick to officiate.