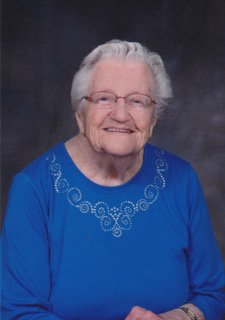 Mary Colson was born January 14, 1922 at the Provost Hospital to John and Rosa Lock. Mary was a miracle baby, born so tiny she fit into a matchbox. She grew up with five siblings on a farm north of Macklin attending Meadowlands School.

She married Norman Colson on January 14, 1952 and they farmed north of Macklin until Norman’s health forced a move to town the fall of 1966.

Mary had a lifelong love of baking and gardening.  Her baking, flowers and vegetables were famous with her taking prizes at the local fair each year.  She continued to plant at least some garden well into her 90’s and was active with baking as recently as this past Christmas.  Mary was a prolific letter writer and historian, keeping all of the family history and local events information handy for whomever needed it. Mary and Norman were active in the Anglican Church, and were founding members of the New Horizons. Mary was active in the St Joseph’s Hospital Auxiliary for over 30 years.  Mary always had a positive outlook on life with “Top of the World” being a common response when asked how she was.

One of Mary’s favorite spots was the Colson Cabin at Emerald Lake where she would watch the birds and wildlife while completing word search puzzles.

Mary was fiercely independent and with the excellent support of Home Care Staff, she remained living on her own until this February when illness forced a move to St Joseph’s Health Centre at the age of 97 years.

Mary passed away peacefully on July 10, 2019 at the St. Joseph's Health Centre in Macklin, Saskatchewan at the age of 97 years.

Mary was predeceased by her husband, Norman; daughter, Marlene; and siblings, Fredrick, Jim, Richard and Charles.

Thank you to the staff at St. Joseph’s for providing such good care and making Mary comfortable during these past four months.

Share Your Memory of
Mary
Upload Your Memory View All Memories
Be the first to upload a memory!
Share A Memory
Plant a Tree