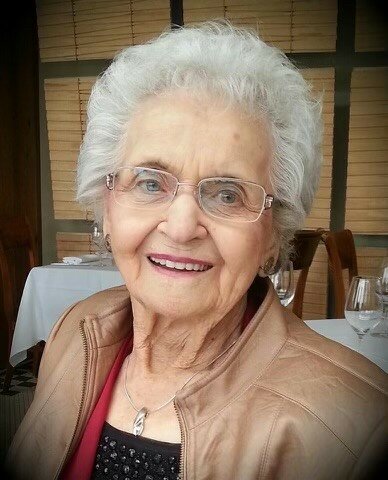 Please share a memory of Christina to include in a keepsake book for family and friends.
View Tribute Book

Christina Mary Rieger was born May 8, 1919 in the Eye Hill District.

When she was two years old, her family moved to a farm near Rivercourse, Alberta where Christina grew up. She attended school and helped out at home – milking cows and feeding the farm animals. After finishing grade 8, she worked as a hired help for awhile. Christina then moved to Lloydminster and worked as a cook at the hospital for several years – which she enjoyed very much.

Christina met Alois Breunig at the Lloydminster Exhibition – the two courted and eventually married in a double ring ceremony along with Christina’s brother, Edward and Alois’ sister, Elsie. They settled on the farm in the Rosenheim District. To this union, five children were born; Allen, Melvin, Leonard, Loretta, and Donald. In 1978, Christina and Alois semi-retired in Provost, and in February of 2003, moved to Hillcrest Lodge. Alois passed away in 2005, and Christina continued to live there until late 2021 – almost 19 years. From there she moved to Provost Long-Term Care until her passing on July 1, 2022.

Christina leaves to mourn; her five children, 14 grandchildren, and 26 great grandchildren; sister, Barbara Hoffman of Kelowna, B.C. as well as many nieces, nephews, and friends.

A funeral service for Christina will be held on Tuesday, July 12, 2022 at 11:00 a.m. at St. Mary's Roman Catholic Church in Provost, Alberta with Father Christopeher Selvaraj Rayappan SAC officiating. Interment to follow at the Provost Cemetery.

Donations gratefully accepted to the Rosenheim Historical Society or to the charity of one’s choice.

Share Your Memory of
Christina
Upload Your Memory View All Memories
Be the first to upload a memory!
Share A Memory